Меню
Меню
Home \ News \ 53 years from the date of the Tashkent earthquake.

53 years from the date of the Tashkent earthquake.

The 1966 Tashkent earthquake occurred on 26 April in the Uzbek SSR. It had a magnitude of 5.1 with an epicenter in central Tashkent at a depth of 3–8 kilometers (1.9–5.0 mi). The earthquake caused massive destruction to Tashkent, destroying most of the buildings in the city, killing between 15 and 200 people and leaving 300,000 homeless. Following the disaster, most of the historic parts of Tashkent had been destroyed and the city was rebuilt, modelled on Soviet architectural styles. Soviet authorities created an Institute of seismology in order to forecast future earthquakes.

The quake caused massive destruction to property. In total, over 80% of the city was destroyed, including over half of the old city. In total, between 78,000 and 95,000 homes were destroyed. Most of these were traditional adobe housing in more densely populated central areas. The majority of the most significant buildings in Tashkent were destroyed; this included 600-year-old mosques. Most of these buildings predated the Russian Revolutionof 1917.

While the official death toll was 15 people this figure may be an underestimate due to Soviet secrecy and other sources estimated death tolls ranging from 200 people to 0.5% of the city's population of 1,100,000.Over 20% more women than men were killed.

A massive rebuilding project was started, with other Soviet republics sending large numbers of workers to assist in the rebuilding process. This changed the ethnic make up of the city, as many of them remained in Tashkent after the work had been completed. The new Tashkent contained architectural styles found in other Soviet cities such as wide boulevards and large apartment block complexes. By 1970, 100,000 new homes had been constructed.

The earthquake also resulted in increased religiosity, with increased interest in many Islamic ritual practices.

To prevent further such disasters from having such a serious impact on the city, in 1966 Soviet authorities created an Institute of seismology, tasked with monitoring seismic changes, such as changes in radon levels and predicting earthquakes.

A memorial stone to victims of the earthquake located above the epicentre was unveiled in 1976.

A black labradorite cube with the date of 26 April 1966 inscribed on one of its sides is installed on a granite pedestal. Another side of the cube presents a clock, the hands of which show the time of 5:24. The cube is split by a crack symbolising the break of the earth and continuing to the foot of the statue, which represents a woman embracing a child and a man trying to protect them with his breast from the strike of the nature. In the background of the monument there is a composition in relief telling about the restoration of Tashkent. 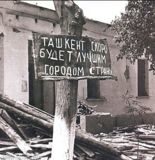 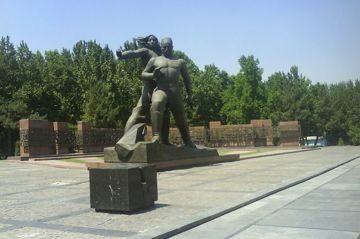